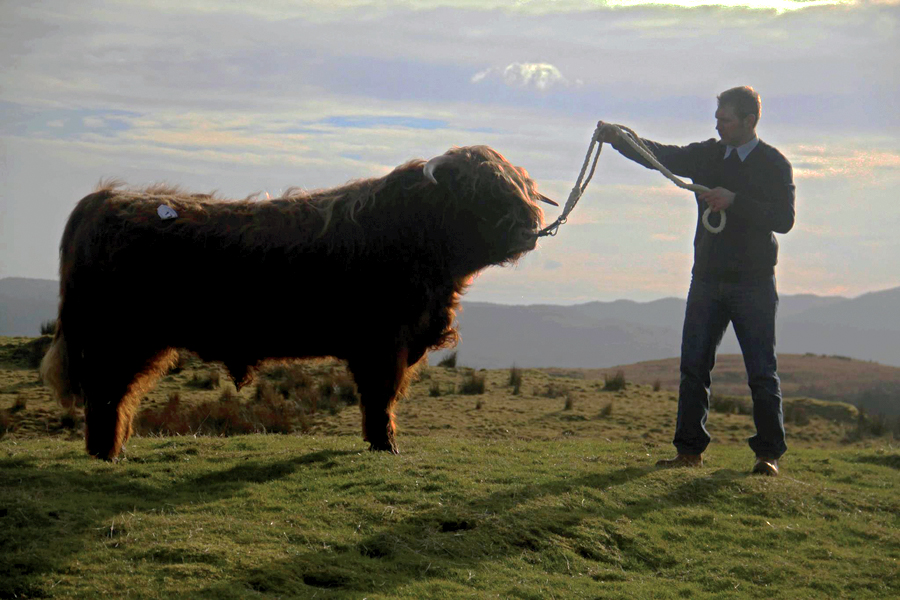 ANGUS MOR OF GLENGOYNE WITH EWAN 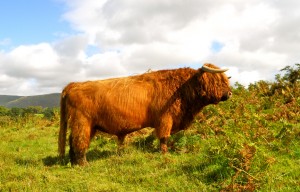 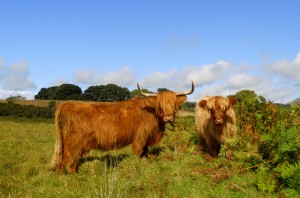 THE DOSSAN RUADH FAMILY CAN BE TRACED BACK IN THE HIGHLAND CATTLE SOCIETY HERDBOOK TO 1883. THIS PROLIFIC FEMALE LINE HAS BRED WITH GREAT CONSISTENCY OVER THE YEARS. THESE FINE 6-MONTH CALVES REPRESENT WHAT YOU CAN EXPECT WITH THESE GENETICS. 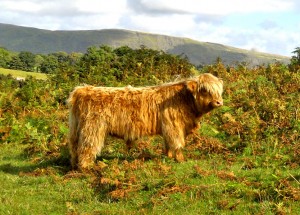 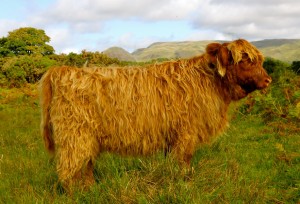 THE SALE RING RESULTS OF PROVEN GENETICS OVER TWENTY YEARS 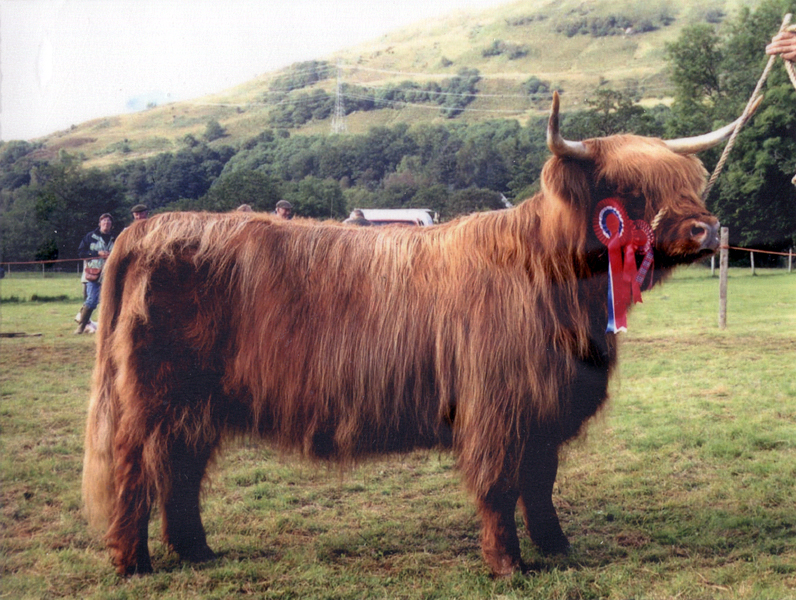 A very typical traditional Highland Cow displaying all the very best characteristics of the Highland breed:

Docility, even when calving can be handled with ease.

Hardiness, producing an abundance of milk under the harshest conditions.

Structural correctness, excellent feet. None of the Dossan Ruadhs have ever required any sort of attention to their feet. If all cattle were bred like this foot trimmers would be out of business.

The Dossan Ruadh family is without question one of the most distinctive in the Highland breed here in Scotland.

Its origins can be traced back to 1883 and the once well-known fold belonging to the Earl of Southesk. The Highland Cattle Society published its first herd book in 1885.

Achnacloich were to establish the line in their fold in 1910 with the purchase of Dossan Dhearg of Duntulm 6783 from Mr John McDonald Glenbrittle, Isle of Skye.

It was at the February Highland breed sale in Oban in 1951 when Dossan Ruadh the 4th of Achnacloich 13499 set the record price for a highland female £677 selling to Lady McRobert for her newly established fold at Douneside. This particular heifer is the 6x-Great-Grand-Dam of Dossan Ruadh the 13th of Coirefuar 51064. On that same day all those years ago Lady MacRobert also bought the reserve Champion bull Victor of Gylen 4187 for £577 the 5x-Great-Grand-Sire of Dossan Ruadh 13th of Coirefuar 51064.

The show ring has never played any part in the breeding policy of either the Edentaggart or the Coirefuar folds over the years, although on the few occasions the cattle have been shown the Dossan Ruadhs have won the championship award on two occasions. At Dalmally Show the largest show of Highland cattle in the UK Dossan Ruadh 3rd of Edentaggart 32264 took the overall championship in 1991.

In 2002 it was the turn of the two year old in calf heifer Dossan Ruadh 13th of Coirefuar 51064 standing at the top of the line in an entry of over one hundred Highland cattle, her dam Dossan Ruadh 2nd of Edentaggart 31072 on the only occasion shown was awarded third prize at the Royal Highland Show as a yearling in 1987 and was also a part of the group of three cattle taking the reserve award the same day. 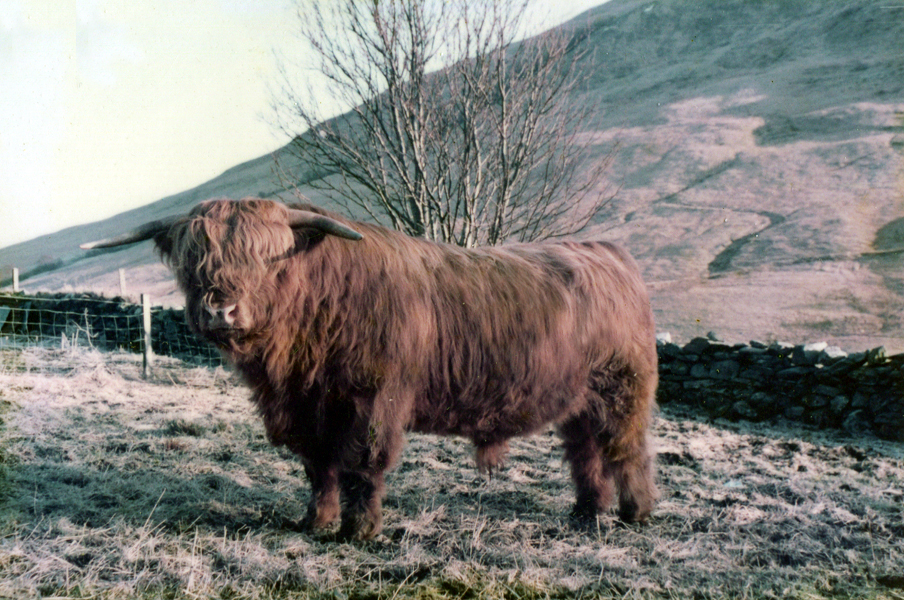 Dossan Ruadh 2nd of Edentaggart’s sire, Padruaig Ruadh of Douglas 6914 was purchased for the Edentaggart Fold at the Oban February sale of 1983 for £1,260 standing second in the senior bull class. His daughters were all outstanding milkers with exceptional temperaments. Padruaig’s dam Barabal 10th of Douglas 5151 was by far the outstanding cow in the famous Douglas fold at that time. When his work with the Edentaggart fold was over he was to continue his very successful career with the Pollok fold siring many excellent cattle including Coinneach of Pollok 7457, selling to the Glengorm fold in 1991 for £9,975.

There are many other well known female lines in the pedigree of Dossan Ruadh 13th of Coirefuar 51064 which play their part, such as Bhanna Prionnsa 123rd of Benmore 23977, Bac Mor of Torloisk 24596, Anna 1st of Ulva 21289, Betidh Ruadh of Douglas 21306 — all outstanding females in their own right and the mainstay in the Highland folds to which they belonged. 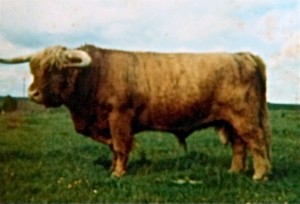 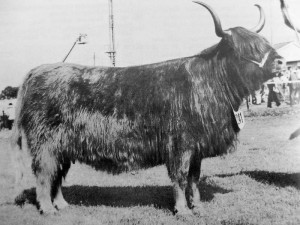 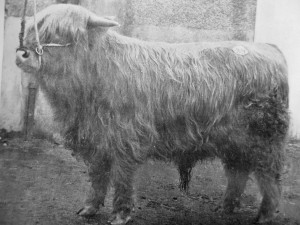 Brogach of Craigowmill 8969 was bred by Ken Brown, and sold at the February sale in Oban 2001. He was placed second in the two year old class and sold to Finnart Estate Kinlochrannoch for £2,100 where he left both male and female calves of outstanding quality, the male calves averaging 491 lbs./ 225kg at an average age of eight months.

He was sired by the Dutch bred bull Brogach 1st of Austie 8031, who in turn was sired by the £14,700 record price bull of 1989 Victor 2nd of Earn 7323. From the Finnart fold Brogach of Craigowmill went to the Isle of Mull to join the Dunmore fold where he sired many prizewinning heifers at the breed sales in Oban, winning the MacLean of Duart Trophy for the best pair of heifers at the February sale in 2008 with Morag 1st of Dunmore 62758 selling for £1,220 and Wyna 1st of Dunmore 62753 selling for £1,100.

When eleven years old Brogach went to the Glengoyne fold belonging to Ewan Mackay where he sired an outstanding group of calves one of which is Angus Mor of Glengoyne.

On the female side of Brogach of Craigowmill there are many outstanding examples of the Highland breed. His dam traces back to the Oban female champion of February 1986, Fraoch 4th of Ormsary 29337 and one of the great breeding cows at Achnacloich Eilidh 8th of Achnacloich 23463. On the male side the outstanding 1979 Royal Highland Show champion cow Una Ruadh 6th of Pollok takes precedence. There are several well known Highland bulls throughout the pedigree, Jock of Balure 6822, Champion at the Oban sale of 1980; Seumas of Glenforsa 6277, Junior Champion Oban sale 1973; Gille Bhuidhe of Glenforsa 6491, Junior Champion Oban sale 1975; and the well known Niall of Douneside 5986 first prize senior bull Oban sale 1974.

There were few bulls if any that did more to improve the fleshing quality’s in the Highland breed over the past fifty years than Niall of Douneside 5986, as is reflected in the outstanding conformation of Angus Mor of Glengoyne.