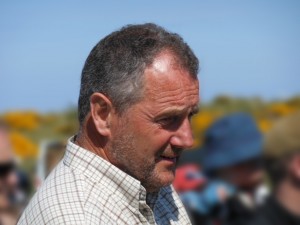 Angus R. Mackay – founded Scottish Genetics as a family business in 2013 with a view to bringing the highest quality traditional Highland genetics into the worldwide market.

A lifelong livestock farmer in the west of Scotland, Angus has been involved with Highland cattle for 50 years. He started his own fold in 1974 and has both shown and sold with great success for many decades. During the 1990’s he ran the largest Highland beef business in Europe, Brig Highland Beef, marketing in excess of 200 Highland steers annually.

Angus has been judging Highland Cattle in Scotland and England since 1977, as well as 7 times in the US in both Denver and Springfield, and has judged the National Shows in Germany, Switzerland, Austria and Denmark.

Angus has been consulting since 1992 on herd assessment, stock management, advising on the establishment and development of new and existing folds, organizing reduction sales and dispersals, assisting with compliance with international regulations relating to the import and export of livestock.

Angus is joined by his sons Iain and Ewan Mackay who each bring their own individual expertise to the selection of cattle. 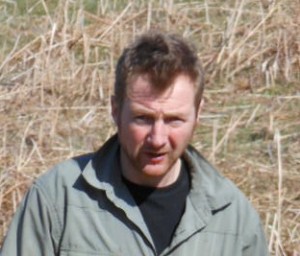 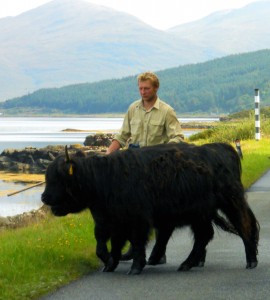 Iain Mackay – currently farms 100 head of Highland cattle on the Torloisk Estate on the island of Mull. He has been breeding Highlands for more than 20 years, shows and sells regularly at the Oban sales, and maintains a successful beef business. His system maximizes the foraging ability of the breed on 14,000 acres of hill ground and exposed, open ground where these cattle belong and can show themselves to best advantage.  He has judged in Scotland and at the National Show in Germany and Switzerland. In 2011 he consigned several animals to Switzerland for a pasture regeneration and conservation project.

Together with his father, in 2012 he consigned 40 heifers and 4 bulls to the project.

He has been on the judging panel of the Highland Cattle Society for more than 20 years, having been for many years the youngest on the panel.

His main focus could be said to be the commercial aspect of the breed as an efficient converter of forage for the beef business. 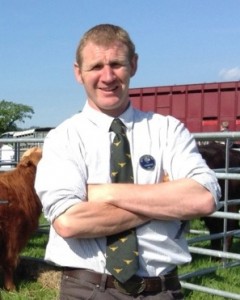 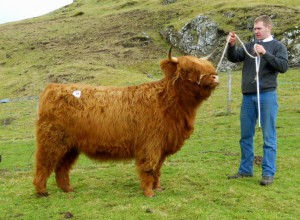 Ewan Mackay – has been breeding his own Highlands for 15 years. He founded his own fold of Glengoyne in 2003 and in 2009 took over his father’s Coirefuar fold.  He has been responsible for selecting numerous prize-winning animals. Ewan has won trophies on a regular basis at Oban, with the champion yearling heifer in October 2008 and the champion 2-year-old heifer in February 2011. He has sold heifers up to 4200 GBP. Ewan also has judged in Scotland and serves on the HCS judging panel.

His main focus would be considered the development of a pedigree herd.